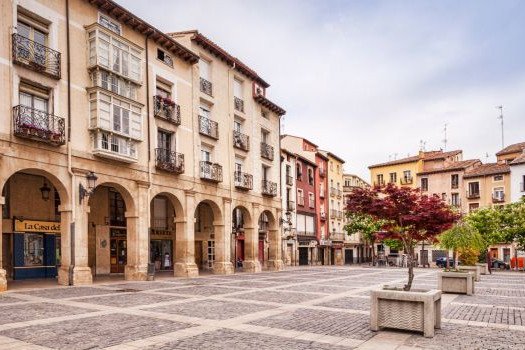 La Rioja is one of the Spanish autonomous communities visited daily by thousands of travelers who want to discover the secrets of its incredible wineries and taste its excellent wines. In addition, there are many other things which attract people, such as culture, traditions, nature, gastronomy or outdoor activities, but one very important is its capital, Logroño. We cover here the best things to do in Logroño.

This city has a special position among the Spanish cities of the north of the country, because Logroño offers many things to satisfy all the visitors. It is important to say that Logroño is a city that you can see in two days and that you can visit walking because it is not big.

Cathedral and churches of Logroño

The Cathedral of Santa María la Redonda is one of the main monuments of Logroño, being a construction that began to be built during the Gothic period but became a Baroque temple during the 17th century. Due to this temple is part of the French Way of St. James, it takes advantage of the declaration of UNESCO World Heritage Site. One of the curiosities of the Cathedral of Logroño is that it has a painting that represents the Crucifixion painted by Michelangelo.

It is also interesentig to visit the Church of San Bartolomé, one of the oldest in the city, dating back to the 12th century. It has a spectacular Gothic doorway that surprises everyone. In addtion, you should also visit the Church of Santa María de Palacio, whose Gothic tower and the octagonal spire are impressive. This church was built on the palace donated by Alfonso VII of Castile in the 12th century, although it has 18th-century Baroque finishes.

In Logroño you have to visit some of the wineries that are in the city. Such is the case of Bodegas Franco Españolas, which are located just 5 minutes from the historic center and whose history exceeds 125 years. It has guided visits to its facilities in which the reason of its name is explained, the elaboration processes and ending with a tasting of some of its best wines. If you want you can book the visit to Bodegas Franco Españolas with us.

In Rúa Vieja street there are several underground cellars from the 16th century that are the most traditional wineries of the city, highlighting Calado de San Gregorio. A little further from the center, the car is necessary to get closer to it because it is more than 3 kilometers from the center, you can visit Ontañón Winery-Museum, where culture and wine go hand in hand.

Another winery that can also be visited in Logroño without having to go to the surroundings is Bodegas Olarra, where they also take initiation courses to the tasting. However, they are further away from the center of the city compared to the other two.

In Logroño there is a place totally dedicated to the culture and tradition of La Rioja, the Museum of La Rioja. This museum is located in an elegant palace of the 18th century, known as Espartero Palace, and here is exposed an impressive collection of pictorial and sculptural pieces from the 12th to 19th centuries, highlighting the Tables of San Millán. However, this museum also has an ethnographic exhibition by having typical objects of the Riojan tradition that help you to understand the evolution and lifestyle of this beautiful Spanish region.

Another of the museums that can be visited in Logroño is the «Casa de las Ciencias«, located on the north bank of the river Ebro, between the iron and stone bridges. The building of this museum is one of the best examples of industrial architecture in La Rioja, being its exhibition of a scientific nature. It has a garden in which many activities are carried out. This museum is open every day except Mondays.

The bridges of Logroño

Logroño is one of the cities through the Ebro River runs. To cross the river, there are several bridges in Logroño. The most original is the Iron Bridge, although the most famous postcard of the capital of La Rioja is undoubtedly with the Stone Bridge in the foreground, which was rebuilt in the 19th century after the collapse of the previous one, probably built in the 11th century to facilitate the passage of pilgrims on the Camino de Santiago.

Where to eat in Logroñoo

Laurel street is one of the most famous streets of Logroño because here are concentrated more than 60 establishments between bars and restaurants that offer wines from the wineries of the Designations of Origin of the Rioja wine country accompanied by the main dishes of La Rioja gastronomy. It is important to say that each restaurant has specialized in a specific tapa, highlighting, for example, La Tavina one of the most famous of Laurel Street.

In addition to Laurel Street, in Logroño there are also others that you have to go through to eat and drink wine, such as San Juan, San Agustín and the streets of Casco Antiguo. It is important to say that San Juan Street is less touristy than Laurel Street, where the citizens of Logroño go to drink wine and eat tapas. The prices are lower than in Laurel, although we do not have to stop visiting the main gastronomic street of the city.

Definitely, Logroño is one of the best places in the Rioja wine country to enjoy gastronomy. Some of the best restaurants of the region are located in this amazing city will make you fall in love.