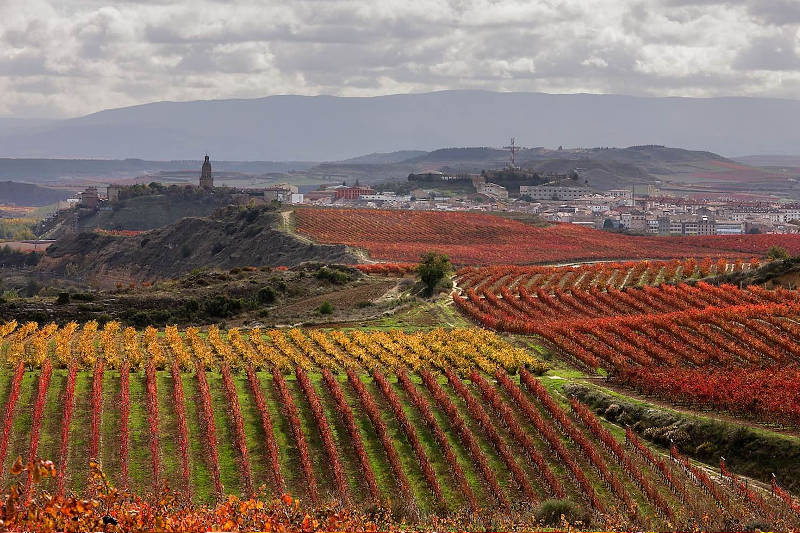 Here is a list of the most interesting and romantic locations to be visited in both Rioja and Rioja Alavesa. The Rioja region has a singular blend of the old and the new. Medieval towns live side by side with avant garde architecture. Old methods of production enhanced by state-of-the-art cellars. Traditional cuisine with a modern flare. These are some of the highlights that anyone must see when the visit Rioja wine country.

One of the villages that you have to visit in the Rioja wine country is Haro. Its historic center is full of Renaissance and Baroque palaces, but tourists are interested in Haro to visit its wineries and taste its wines. In fact, the main festival of the town is the «Battle of Wine». This festival is celebrated on June 29 and the participants soak themselves with red wine.

One of the places to visit in Haro is its famous Barrio de la Estación, which concentrates some of the most centenary wineries of the Rioja Denominación de Origen, such as Cvne, Roda or Muga. In the wineries are explained the processes of winemaking, facilities, fermentation or harvest, to end up with the tasting of some of the wines of each of them.

San Millán de la Cogolla is one of the locations most visited in Rioja. The landscape is terrific here but the main reason why tourists get to San Milla is two monasteries, Suso and Yuso. The oldest of both is the Monastery of Suso. The tomb of San Millan was here and it was a place for pilgrimage throughout the Middle ages. The design stands out thanks to the simplicity of the shapes and the interior is most inusual. The tomb of San Millan was moved to the Monastery of Yuso in 1053.

The Monastery of Yuso is also known as the “Escorial of La Rioja”. It was originally built in Romanesque style and later rebuilt in Herrera style. The interior has many interesting features: The Hall of the Kings and cloisters of San Millan and San Agustin. The most impressive things in the Monastery of Yuso is the library, which has valuable manuscripts and codices which contain the first writing in Spanish language.

This small town in Rioja Alavesa (Basque Country) was founded in 908 by King Sancho of Navarre. Its original name was La Guarda (derived from the Spanish word which means protection). As many other villages created with a defensive criteria in mind, Laguardia was planned with the shape of a ship. Its fortifications were extendend several times and the town witnessed many battles.

Laguardia offer fantastic vies over the valley. Its most interesting monument is the Church of Santa Maria de los Reyes. The portal is late 14th century and it is a masterpiece of Spanish Gothic carving. Another interesting church is that of San Juan Bautista. It was begun in Romanesque style and was continued in Gothic. Laguardia is home to many wineries and many good restaurants are also located in the town.

Santo Domingo de la Calzada is one of the most important cultural points of La Rioja. It is a obligatory place for the pilgrims of the Camino de Santiago, who visit the Cathedral of the city, a Romanesque, Gothic and Baroque style temple that is the main tourist attraction of this place. In addition, The cathedral highlight because its tower is not attached to the rest of the building and it is declared a World Heritage Site because it is within the route of the Camino de Santiago Francés.

In Santo Domingo de la Calzada, which is located just 40 minutes from Logroño, you can also visit other monuments appart from its cathedral, such as manor houses, palaces, hermitages or nice churches. This town is a must for art, history and culture lovers in the Rioja wine country.

Elciego is located in Rioja Alavesa, in the Basque Country. The wine history of Elciego goes back to the 16th-17th centuries, when the vineyards increased, becoming in the 19th century in the village that produced the most liters of wine of the region. All these facts explain why in Elciego you can find several traditional wineries, although Bodegas Marqués de Riscal is the most well-known of all them.

In fact, one of the most beautiful views of the town is with the vineyards that surround it, the fluvial course and in the background all the monumental complex. In addition, this charming village is perfect to enjoy the Nature, because is located near Toloño Mountains

Calahorra is probably Rioja’s most historical town. It has a long history. As early as 200 years BC the Town had the name of Calagoricos. At that time it was an important place and there is archaeological evidence of this. The Romans invaded Calagoricos in 189 BC. They changed the name to Calagurris and made it a Civis Romanus. The town was a cultural center at the time and its influence remained till the Middle Ages.

Calahorra has a fantastic cathedral that was built between the 13-15C. Most of it is Gothic, though Renaissance style is also present. The interior is lavishly furnished with grilles, alters and retables. The churches of Santiago (with very interesting byzantine features) and San Andres (late gothic) are worth seeing.

Sajazarra is one of the most beautiful villages in Spain and is located near Haro. This small town does not have more than 200 inhabitants and is one of the most unknown in La Rioja. However, tourists are surprised when they visit it, because it has an amazing 15th century castle and a mostly Renaissance style church. In addition to visiting the castle and the church, you also have to walk through the central streets to see its 13th century wall or some baroque houses from the 17th-18th century. Numerous hectares of vineyards surround Sajazarra, but this town is a cultural stop in La Rioja because it does not have important wineries, which are located in other places such as Haro.

Briones is part of the list of the most beautiful villages in Spain. Its main monument is the Church of Our Lady of the Assumption, built in 16th century and one of the examples of Spanish Elizabethan Gothic architecture in La Rioja. However, Briones is famous for the different wineries that can be visited around the town. In fact, in Briones was recorded the Spanish series «Gran Reserva», set in the Rioja wine world

In Briones you can find Bodegas Vivanco, where you can visit the Museum of Wine Culture, considered one of the best in the world. This museum, considered one of the best of this sector in the world, has an extension of 4.000 square meters and here the tourist find, among other things, a garden with about 220 varieties of grapes from all over the world. With this experience, you can to delve into the knowledge of wine.